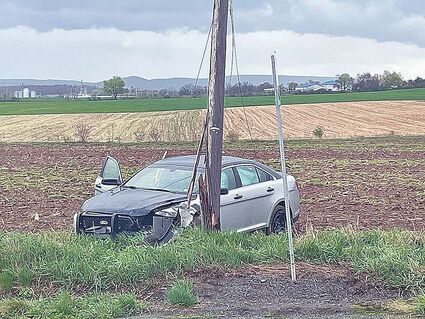 A car striking a utility pole along State Route 164 between Roaring Spring and Martinsburg on Monday, April 12, caused a brief power outage in the area. Penelec had to replace the pole. No information was available about the driver.

No long-term power outages were reported after a car hit a utility pole on State Route 164, Cove Mountain Road, just east of the Spring Cove Middle School at around 11 a.m. Monday, April 12.

According to reports, the driver was traveling east on SR 164 when he left the roadway and drove over a ditch onto the grass area in front of the Spring Cove baseball fields. The vehicle drove past two of the baseball fields before becoming airborne near the third field, hitting and damaging the outfield fence.

The vehicle continued through the field before heading back toward the roadway, hitting a uti...