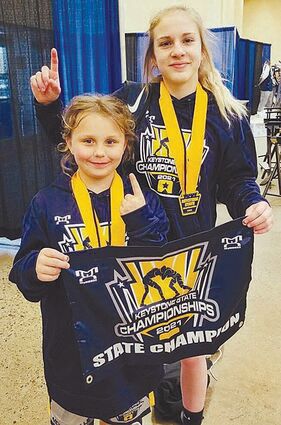 Above are two of the Assassin wrestlers who came home from the Keystone State Championships as state champs: Arianna "Wild Child" Miller and Jordyn Fouse.

Members of a local wrestling club performed well, winning and placing at a state-level tournament.

Chelsie Hollern, club coordinator, told the Herald that My House Wrestling sponsored a statewide tournament to make up for the regular meets and tournaments canceled due to COVID-19 restrictions.

The tournament was held April 1-3 in Monroeville.

"It was a big event," Hollern said. "It was basically combining what normally would have been states and regionals, so it was huge. A lot of wrestlers."

The Cove-area wrestlers are members of the Pa. Assassins Wrestling Club, which is based in Altoo...