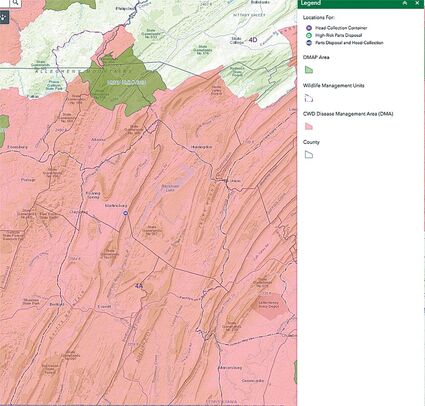 Chronic Wasting Disease is a neurological disease that affects members of the cervid family (deer, elk, moose, and reindeer/caribou). Like mad cow disease in cattle, scrapie in sheep and goats and Creutzfeldt-Jakob disease (CJD) in humans, it's caused not by a virus or bacteria, but by abnormal prions, or proteins. Hunters play a vital role in this management action. The Game Commission give hunters expanded opportunities to harvest deer in DMAs. For the 2020-21 hunting seasons, the Pennsylvania Game Commission is offering Deer Management Assistance Program (DMAP) permits for eight Enhanced Surveillance Units. The permits allow hunters to take antlerless deer during the 2020-21 hunting seasons. They went on sale on July 30. This map shows the CWD Disease Management Area and the Deer Management Assistance Program areas.

Following the detection of CWD in both captive and free-ranging deer in Pennsylvania, the Game Commission established Disease Management Areas (DMAs).

Within DMAs, rehabilitation of cervids (deer, elk and moose); the use or possession of cervid urine-based attractants in an outdoor setting; the removal of high-risk cervid parts; and the feeding of wild, free-ranging cervids are prohibited.

The Game Commission has three Disease Management Areas (DMAs) – DMA 2, 3 and 4 – across the state. (DMA 1, formed after discovery of a CWD-positive deer on a captive deer farm in Adams County in 2012, was dissolved after five years without detecting any new CWD cases there.)

Regulations meant to slow or stop the human-assisted spread of CWD across the landscape apply to all DMAs. It's illegal within DMAs to rehabilitate injured deer, possess or use cervid urine-based attractants, remove high-risk parts and feed free-ranging deer.

The boundaries of DMAs can change year to year, based on the location of CWD-infected animals discovered through testing. Current boundaries for 2020-21 are as follows:

DMA 2 was established in 2012 and now covers approximately 7,470 square miles, an expansion of 755 square miles over last year. For 2020 biologists expanded it west into Westmoreland County northwest into Cambria and Indiana counties as the result of CWD-positive captive deer facilities and north into Centre County and Mifflin, Union, and Snyder counties as the result of two CWD-positive adult male roadkill deer.

DMA 4 was established in 2018 and now covers approximately 746 square miles, an increase of 397 square miles over last year. For 2020 biologists expanded it further south into Lancaster County after detection of a captive deer with CWD. It now covers portions of Berks, Lancaster, and Lebanon counties.