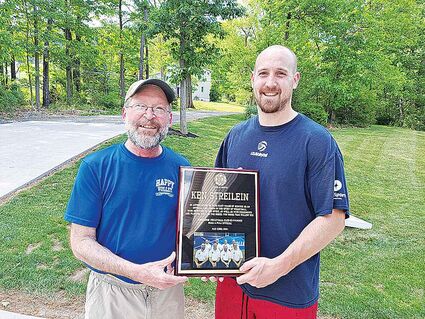 Horseshoe Volleyball Club technical director Mike Kraft (right) presents a plaque to Ken Streilein for 30-plus years of service to the sport of volleyball.

One of the "unsung heroes" of the Blair County volleyball community was recently recognized for his years of service to the sport.

Streilein has served as a high school and college volleyball official for 32 years along with 31 years coaching at Central, Hollidaysburg and the Horseshoe Volleyball Club.

"Ken does so much for the players, parents and coaches as the director of the Horseshoe Volleyball Club," Kraft said. "His behind-the-scenes work is the crucial component of our club's success. His humility is unmatched and he never asks for anything in return."

Along with his role as Horseshoe Volleyball Club director, Streilein, a 1975 Central High School graduate, held the role of Western Pa. AAU Volleyball Director for the past two years.

"Ken can always be relied upon to cover a practice, run a tournament, officiate, offer advice or just be there to support you," Kraft said. "You'd have to be involved in our club to understand the time and commitment he puts forth for our athletes and families. He's been doing administrative tasks as the director of Horseshoe for a decade now. When you add that to his three decades of coaching, three decades of officiating, and his past two years as Western Pennsylvania AAU Volleyball Director, the man deserves to be in some kind of hall of fame."

The Horseshoe Volleyball Club was founded in 2011 by Streilein and Bob Kasun. The club offers club volleyball opportunities for girls and boys ages 12 through 18.

"Ken's motivation in starting the Horseshoe Volleyball Club has always been about helping volleyball players advance through club volleyball and growing the sport," said Kasun, former Bishop Guilfoyle Catholic girls' and boys' volleyball coach. "Hundreds of volleyball players along with his fellow coaches and officials in this area owe a debt of gratitude to Ken for his dedication to the sport. He's a tireless worker for volleyball, and his recognition is well-deserved."

Along with Streilein's recognition from the Horseshoe Volleyball Club, he received a certificate of appreciation from AAU Volleyball national office and a bench will be dedicated in his name at Morrisons Cove Memorial Park.

"Ken is one of the great unsung heroes of volleyball for the Blair County area," said Chuck Gojmerac of Roaring Spring, a long-time college and high school volleyball official. "He has given countless hours of service to the volleyball community as an official, coach, mentor and club director. Volleyball in our area would not be what it is today if it were not for Ken. He is also one of the first people to deflect praise and that's what makes him even more special to our community."