This year, the honorees of the parade will be Dennis and Doug Smith. 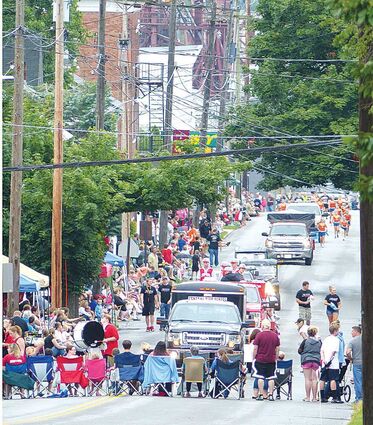 This photo is from 2019 Ag Parade. That parade was held on July 2, 2019. Heavy thunderstorms rumbled through the area prior to the start of the parade, which ran for approximately 2 1/2 hours.

This is the 39th Ag Parade. The parade is held to honor agriculture, the military, area businesses, civic groups and marching units.

Last year's parade was on an alternate route due to COVID-19. This year, the parade will be on the normal route, which was confirmed on Tuesday, June 22.

This year, the honorees of the parade will be Dennis and Doug Smith.

The Ag Parade Grand Marshal will be Morrisons Cove Memorial Park, which is celebrating its 100th anniversary this year.

Though groups of people, such as FFA officials, Desert Storm troops and veterans, have been recognized as grand marshal in the Ag Parade before, this is the first time that an organization will be the grand marshal, according to Luanne Eckenrode, past park board president (the first female president), longest-serving board member and parade committee member.

"This is a great way to recognize the service the park has done for the community for 100 years," said Eckenrode. "The park may be housed in Martinsburg, but it serves all of the Cove."

"One of the reasons people get on the board is to serve the community," said the park's Board President Joe Logan. "It's not the board who's being recognized; it's the park. We're just its stewards."

According to Eckenrode, the park began as a grove of oak trees and served as a picnic place. Over 100 years, the park and its facilities have grown, now offering a pool, bowling, a gym, play parks and skating.

Logan said the changes just keep coming. The last three projects done in the park were ideas from individual groups in the community.

"The community came up with these ideas and ran with them," said Logan. "If they keep it up, the park will be here in another 100 years."

Both Eckenrode and Logan thanked the community for continued support of the park.

"Tentacles of the park are all over the community," said Logan.

Army trucks were displayed using the alternate parade route of the 2020 Ag Parade held on June 30, 2020. Pandemic restrictions altered but did not stop the annual parade from happening.

Eckenrode said that the parade committee is hoping that there's no rain and it's not too hot on parade day, but she knows people will show up no matter what. The parade will happen rain or shine.

Parade lineup is as follows:

The parade will end at Morrisons Cove Memorial Park. After the parade, enjoy the celebration with rides, food, entertainment and games.

Those who have questions concerning the parade, please contact Steve Mowry at [email protected] Confirmation of participation for the 2021 parade would be appreciated.