Local Man Shares Passion for the Outdoors Through Art 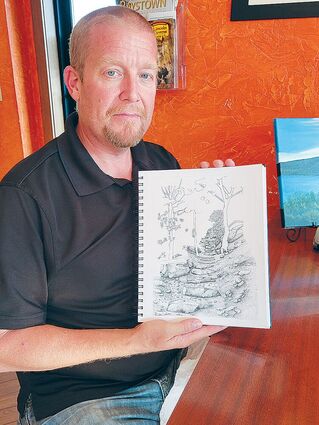 Brian Ford uses his love of the outdoors to inspire his ink drawings. He continued work on his depiction of the Thousand Steps trail during Art Walk Huntingdon on July 15.

Though it has been two decades, one local man was able to combine his love of art with his love of the outdoors.

Brian Ford is an artist from Martinsburg that is a part of HBF Outdoors LLC. His work mainly focuses on the Huntingdon area, with some featured landmarks including Raystown Lake and Juniata River.

Art became a significant part of his life from a young age, he said.

"When I was a little kid, I would draw characters from the Sunday comics. By high school, I got my electives done early so I could focus on art my senior year."

After graduating, Ford went on to art school, but eventua...