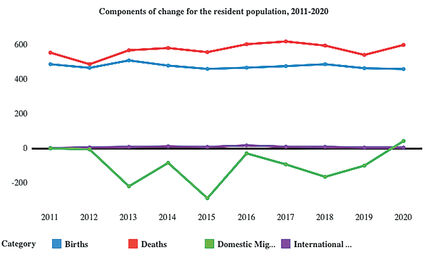 Deaths outpaced births in Bedford County between 2010 and 2020, contributing to a population decline in both jurisdictions. Domestic migration also contributed to population losses, although Bedford County entered a growth trend in 2018 that is continuing.

By Sept. 30, the Director of the Census Bureau will furnish Pennsylvania Gov. Tom Wolf and state legislative leaders with additional 2020 Census population counts for state legislative districts, municipalities, census tract, and other geographies. In addition to supporting the state's redistricting process, this data will also influence how much state and federal funding communities receive over the course of the decade.