Police Chief Puts Up 13 Flags in Honor of 9/11, Soldiers Killed 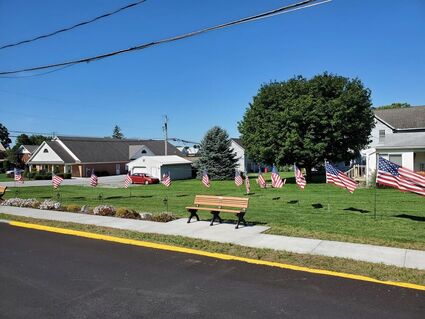 Martinsburg's police chief and his wife put up 13 flags to honor those killed on 9/11 and recently in Afghanistan.

Police Chief Kerry Hoover reported that the flooding on Sept. 1 did not generate that many calls, and the roads in Martinsburg were "pretty decent."

The council commended the fire department for committing to 16-hour shifts to pump out basements during the flooding.

The council set a tentative date for trick or treat on Oct. 28 from 6 to 8 p.m. Trick or treat usually takes place the last Thursday in October. This is subject to change if surrounding counties choose a different date.

The borough has to obtain a free permit to proceed with electronic speed signs. If the borough purchases four signs, it will need two permits. After getting the permit, engineers will come to the borough and suggest where the signs should go.

If the borough buys four electronic speed signs, it will get a $1,000 discount. The price is expected to be $3,250 per sign.

These signs do not just monitor speed. They will keep track of how many vehicles are going each way and which direction they are going in, which will allow police to see when traffic is busiest.

Hoover also noted that he and his wife put up 13 flags in the lot beside the borough building in honor of Sept. 11 and the 13 soldiers who were killed in Afghanistan. Hoover said it was a "team effort," and multiple people came to help them. Flowers were brought and left after the flags were up. Hoover shared a photo on the Martinsburg Borough and Police Department Facebook page where it received many positive comments.

The council applauded Hoover for his efforts and thanked him for putting up the flags.

The W. Gene Henry Memorial Committee commended Book Leidy for putting in the time to edit the photo chosen of Gene Henry for the memorial plaque. The original background was too dark, and Leidy was able to change it to a light background.

"Those of us on the committee will be donating," Kensinger said. "If we're going to ask others to do this, we need to do this.

Kensinger also noted that the fire department will be holding a chicken barbecue on Sept. 25, and half of the proceeds will go to the Gene Henry Memorial fund.

"Look at what Gene Henry has done for us and the community," said Kensinger. "He has saved the borough many tax dollars."