SCSD Votes to Follow Mask Mandate, Inciting Anger From Parents, A Plea From Student For No Virtual School 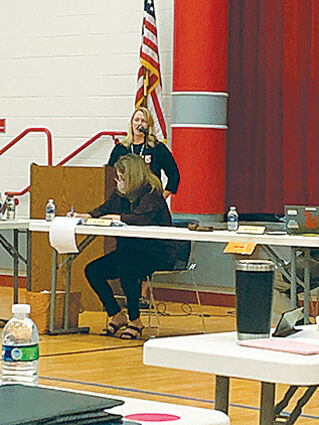 Kim Smith, counselor at Spring Cove School District speaks during public comment to tell the group that kids are willing to wear masks to have a normal year and attend school in person as well as reducing quarantine time.

The regular voting meeting of the Spring Cove District Board of Directors was held Monday, Sept. 20, at the Spring Cove Elementary School with a packed gymnasium waiting to address the school board.

Fourteen people addressed the school board during the recognition of visitors portion of the meeting, but almost every seat was filled in anticipation of the outcome of the board's vote on the motion to approve the resolution regarding the current mask order.

The vote was a unanimous 9-0 count to follow the mandate/order from the Pennsylvania Department of Health stating that each teacher, student, staff, or visitor working, attending, or visiting a school entity shall wear a face covering indoors, regardless of vaccination status.

The school board solicitor from the Beard Legal Group had advised the district to follow this mandate as the Pa. Dept. of Health is an arm of the Center for Disease Control and really carries the same weight as law. Defying the mandate could have extremely negative repercussions for the school district. This was not the outcome that most of the crowd in attendance had hoped to hear.

Travis Ott, who spoke in the public forum for the second consecutive week said the school board was there to represent the people.

"Masking is nonsense," said Ott. "We just had 100,000 people packed in Beaver Stadium unmasked. We can write five candidates in and take control of the school board if this board forces masking on the children."

Ashley Smouse, a mother of two children in the district called the mandate unenforceable. She said parents take care of the medical needs of their children, not the school.

Russell Dixon, father of four children in the district, an engineer, told the crowd the problem is that citizens have trust in the CDC and federal authorities, but they cannot be trusted anymore.

Lynette Guyer, a school nurse from Central high school expressed a different sentiment. She said the masks were just a measure to stop the spread of COVID-19 cases at the school, and they have been successful.

Leah Decker, a senior at Central High School, was the only student to come forward. She said she would rather stay in school with masks than miss her senior year by having to go to virtual learning. She added that many of her friends felt the same way.

John Pelic echoed that sentiment by saying, "Kids are not against masking , it is the parents."

Pelic told parents in the audience to trust the people they trust to educate their children. He continued by saying they have no personal motive to force masking on anyone, it is to protect the students.

Kim Smith, who has one child remaining in school and is a counselor in the district said, "Kids will wear masks to have a normal year and attend school in person. They want fans at games, a prom, and other school activities, they do not want to go to virtual learning but want in person learning. Masking reduces quarantining."

Another parent whose son had 57 days in quarantine last year told the group to ask their kids. They want to be in school. Masking reduces quarantining.

Conversely, Michelle Krider said, "It is hard to breathe with a mask on 7 or 8 hours a day."

Krider said she was previously a reporter and claimed that masks are useless and harmful, saying they cause self contamination.

Superintendent Dr. Betsy Baker said, " According to the CDC's COVID data tracker, the total number of COVID cases in Blair County over the last 7 days was 342. This is a 27 percent increase from the prior 7 days. Although COVID case counts remain high in our county (and in all Pa. counties), we currently have only one active case in our schools. Our cumulative total number of school-based cases, since school began one month ago, is 5."