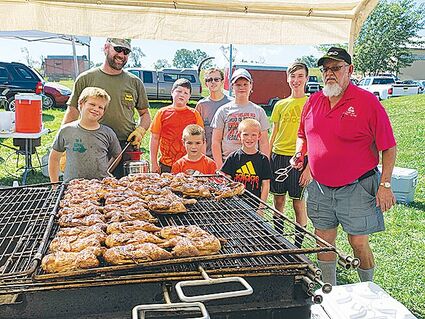 The show featured many winners:

• Winner of the 2004 Ford Tractor was Scott Ayers

• Winner of the Peddle Tractor was Mary Tears

• Winner of the Case toy tractor was John Garman

There were 71 raffle baskets collected by Melanie Clapper, which brought $4,655 dollars. Shirts and sweatshirts were also sold by Clapper in Case colors, which are tan, black and orange.

Apple Cider pressing began on Friday and continued Saturday. 250 bushels of apples were used for the cider and apple butter. It takes about 8 hours to turn the apples into apple butter.

A tractor pulling barrel wagons was a big hit for small children.

Camping was available on the show grounds.

Many food vendors were available such as Williamsburg Auxiliary with taco salads.

Bryon Sipes Smokehouse Barbecue was a huge hit featuring brisket and other food items and his homemade barbeque sauce. This sauce was started in 2010 and has become very popular. The sauce can be bought in some of the local stores such as Zimmerman's in Woodbury, Fishers Store, C & S market, Imlers Poultry, and others. Sipes has a trailer set up in East Freedom along 36.

Claysburg Pizza was available with their food trailer.

Dairyland was also there and the committee for the Dairy princess served ice cream, milkshakes and more.

The kitchen of the Southern Cove Power Reunion had a successful weekend. The biggest hit seemed to be chicken finger baskets, hot sausage sandwiches and cheese fries. John Pensyl has run the kitchen for over 18 years and a lot of planning and hard work goes into this kitchen.

Royal Rangers of Everett is a wonderful group of boys directed by Dennis Dibert, who has been the director for 15 years. The boys helped cook over 500 chicken halves for this year's event. They also camped on the grounds. This group is described by Dennis as being like boy scouts, but it has a Christian base. Every activity is taught with a Christian example. This group will do catering for organizations.

Barb's Treat Boutique was present with all kinds of homemade bake good. Barb has a certified kitchen in her New Enterprise home and has a refrigerator on her porch. Her Facebook page shows what she has, and those interested can stop by and purchase what they want from the refrigerator, leaving your money on the honor system.

Some new people who set up this year were Allen and Becky Dively with a miniature farm display that had been ongoing for thirty years. 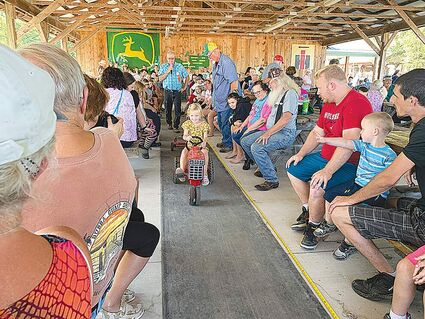 Rodney Boyd was at the display of 505 John Deere toys. Joe Boyd, his father, passed away April 3, 2020, from cancer. Joe loved to tell anyone about his collection, and he was missed dearly this year. The family also displayed some John Deere tractors, which was new this year.

A few other vendors there were Pink Zebra with candles and warmers and fragrances; Anita's Country Scents & Suds with great candles; and Quiltin' Critters with beautiful table runners, wall hangings, and afghans

The last tractor pull of this year will be Oct. 9 and will start at 4 p.m.