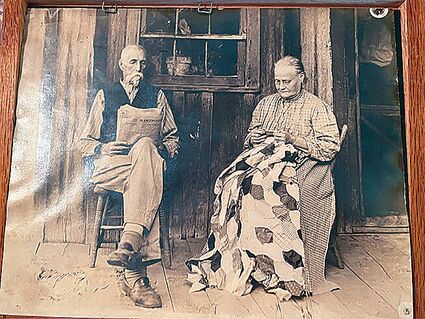 The original photo of John and Margaret Border shows John reading his Herald and Margaret working on a quilt.

"I'd like to get that picture in the paper," Clyde Claycomb, 93, said to his sister, Anna May Clapper, one day.

Clapper reached out to the Herald to make that happen.

Hanging in Claycomb's living room is the painted version of a photo taken of his wife's great-grandparents.

In the photo, John Border and his wife Margaret are sitting on their front porch. While Margaret works on a quilt, John reads a newspaper. The title of the paper clearly says "Martinsburg," and Claycomb believes it is the original Morrisons Cove Herald, which was previously called the Martinsburg Herald.