By BRADY ALBRIGHT
For the Herald 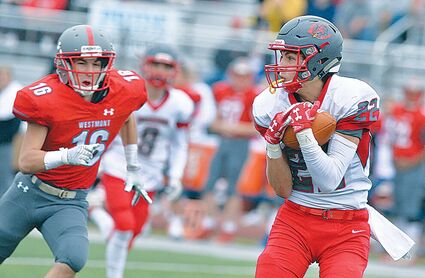 Central's Eli Lingenfelter (22) pulls in a throw from quarterback Jeff Hoenstine and converts it into a touchdown run against Westmont Hilltop.

The Dragons annihilate another Laurel Highlands opponent in a 48-7 victory over the Westmont Hilltoppers.

The Dragons continued their momentum into the second half by tacking on three more touchdowns by Gregg, Ethan Eicher, and...