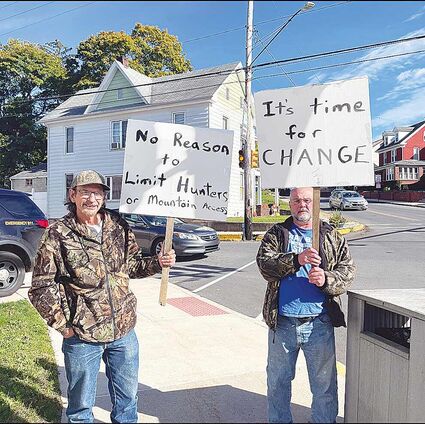 John Camerer and John Miller hold signs in front of the Roaring Spring Borough building on Monday, Nov. 1. The pair were joined by five others to protest the borough's new ordinance restricting use of Plum Creek Mountain.

Seven people gathered outside the borough building in Roaring Spring on Monday afternoon, Nov. 1, to protest against Roaring Spring Borough's new ordinance on the use of Plum Creek Mountain. Those on hand were carrying makeshift signs that expressed their displeasure with borough council for closing the ground to recreational use and limiting access to hunting for borough residents only.

While the turnout was small in comparison to the 50-plus who showed up to speak to council during a meeting in May, when council first began discussions on the mountain's future, those who did come made the...