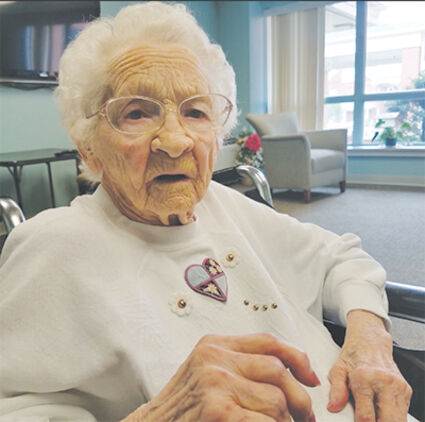 Susan E. Musselman, 102, a resident of The Village at Morrisons Cove, formerly of Klahr, passed away Wednesday, Nov. 3, 2021, at the home.

Susan was the last surviving member of her immediate family. She was preceded in death by a daughter Helen Joanne Benton, son-in-law Bobby and 10 siblings: Laura, Edith, Sarah, David, Helen, Grace, Kathryn, William, Russell and Hattie.

Susan was a member of the Upper Claar Church of the Brethren, where she served with the Ladies Fellowship and Kids Club. She was a homemaker and huckster and enjoyed baking, reading her Bible and spending time with her family.

A funeral was held Monday Nov. 8, 2021, at the Upper Claar Church of the Brethren. Pastor David Maxwell officiated. Interment was at Upper Claar Cemetery.

Susan loved to spend time at Musselman’s Grove, which was owned by her family and in lieu of flowers contributions may be given to Musselman’s Grove c/o Peggy Musselman, 520 Upper Claar Road, Claysburg, PA 16625 to purchase benches in her memory.