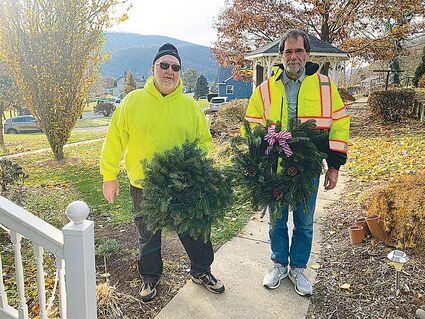 Jeff Mellott and Paul Detwiler showing wreaths made by Southern Cove EMS as a fundraiser.

Southern Cove EMS, located in New Enterprise, made Christmas wreaths as a new fundraiser this year. The wreaths were assembled at Debbie and Jeff Mellott's Home in Loysburg by about 18 volunteers including EMS personnel. They also made vertical and horizontal swags. These items went on sale at the Mellott's home on Nov. 20.

Wreaths were made with Douglas fir, fraser fir, a Concolor base and filled in with cedar and white pine. Some decorations of bows and pine cones were applied.

Over 50 were made the first night and they will be making more for the Holiday Craft and Vendor Show on Saturday, Nov. 27, from 8 a.m. to 4 p.m. This show is sponsored by Southern Cove Fire Company at the Replogle Building in New Enterprise. There will be food available.

"Everyone really needs to support the fundraisers for the EMS and fire company," said Debbie. "We had a fire, and they were here. Most of the members work full time jobs and still go where they are needed with about 2-3 hours of their time at each incident. Other fundraisers such as turkey dinners and sandwich sales need to be supported. Without these folks, we will not have a fire company or ambulance in our community."