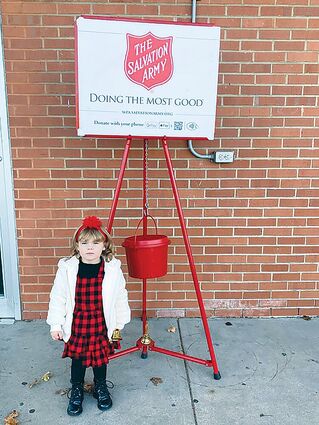 The Martinsburg Service Unit of The Salvation Army is beginning another year of assisting families and individuals. The annual kettle drive is officially under way.

Remington LaRae, 2 1/2, daughter of Mike of Duncansville and Rachael of East Freedom, rang the bell with her grandmother, Barbara Dewitt, for the Salvation Army at C&S Market.

Dewitt says Remington "had a blast" and was saying "Merry Christmas" to everyone.

According to Suzanne McNally, human services secretary, the funds will be used to help area families with electricity, fuel oil, water and sewage and rent. McNally said that 90 percent of the proceeds assist people with Martinsburg addresses.

McNally has been in charge of the Martinsburg area since 2007.

Donations may also be placed in The Salvation Army's traveling kettle, which is located at BCO Mart, Martinsburg RR, until Christmas.