Central Seniors Earn Patent for Invention After Years of Development 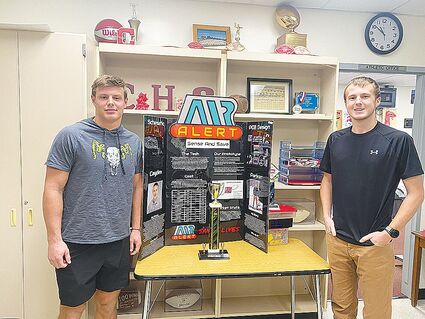 Central Seniors Parker Gregg (left) and Cayden Wright (right) have earned awards and a patent for their invention of Air Alert, a device that detects carbon monoxide to prevent carbon monoxide poisoning.

For about four years, Parker Gregg and Cayden Wright have been developing and perfecting their invention, Air Alert. The Central seniors have officially received a patent for this life-saving invention.

The idea originated from Gregg, who lost his father to carbon monoxide poisoning four years ago.

Gregg approached Wright, his friend "pretty much since the day I was born," and said, "Hey, I got an idea."

Gregg and Wright began working on Air Alert the s...