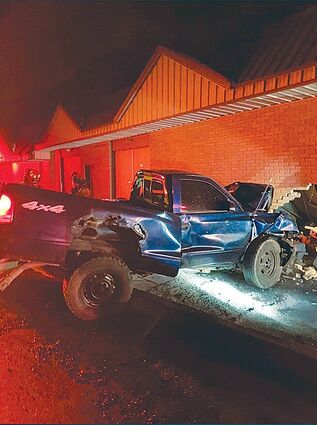 A frozen bridge caused the driver of this truck to lose control and crash into a building along Woodbury Pike in McKee on Christmas Eve.

A Christmas Eve crash in McKee damaged a building and sent a stark reminder that roads can get slick without warning and to use caution when traveling over bridges because they freeze before road surfaces.

Rescue crews from Roaring Spring were called out at around 2:30 a.m. when a pickup truck driven by Brandon E. Mowery, 34, of Claysburg, lost control while traveling over the bridge on Route 36, McKee, and crashed into a building at 8320 Woodbury Pike, causing severe damage to the building and vehicle.