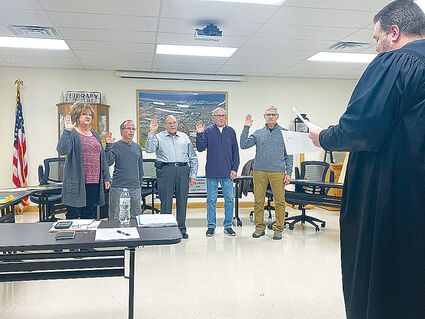 (From left) Jane Staily, Ed Bennett, James Dell, Durban Metzler and Charles Kensinger were sworn in to Martinsburg Borough Council by Judge Andrew Blattenberger. Mayor Richard Brantner Sr. and Councilmember Janet Blattenberger were unable to attend the meeting but will be sworn in before the next meeting.

Much stayed the same after Martinsburg Borough Council's reorganization meeting on Monday, Jan. 3.

Magisterial District Judge Andrew Blattenberger attended to swear new and old members into office. Edward Bennett and Charles Kensinger were again sworn in on council for 4-year terms. Durban Metzler also returned for a 2-year term. M. Jane Staily was sworn in as the tax collector for a 4-year term.

New member James Dell took his oath for a 4-year term on council.

Other new councilmember Janet Blattenberger was not present to be sworn in for her 4-year term due to a broken leg....