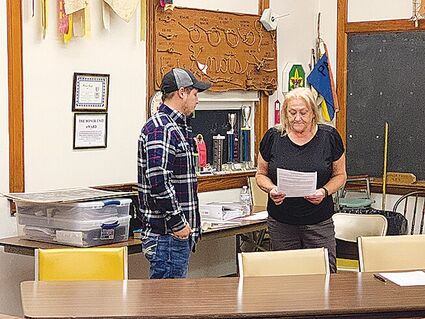 Woodbury has a new mayor. Jordon Pabon is sworn in by Barb Wilt.

Woodbury Borough met for its first session of the year on Jan. 3 at the Woodbury Community Center at 7 p.m.

After the salute to the flag Shawn Claycomb, who is now president, initiated the meeting. Expenditures were reviewed as well as state aid expenses. Total expenditures were $5,389. The balance in the general fund including two CD's is $131,723.

In old business, Altoona Savings was sent a letter and it was received on Dec. 22. The bank has thirty days to respond. This letter is concerning the Kauffman House accumulation of fees and ordinances compliance.

A sink hole across from Hometow...