Blast from the Past: Cove Stores 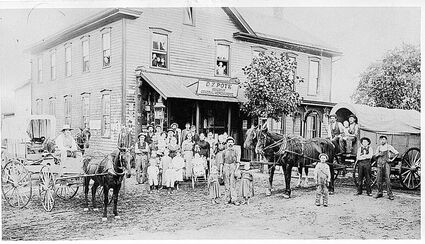 Pote's Store Photo, Bakers Summit Known in the photo (from left) are Harry Cloud, James A. Dallas, Unknown, George H. Appleman, E. H. Walter, Andy O. Biddle, David O. Biddle, David J. Wertz, A.Z. Pote, S.H. Hinkle, C. Wesley Myers. This picture was taken by Eli L. King in 1901 using gun powder in a saucer to produce the flash needed to take the photo. The store was opened in 1876 and owned and operated by the Pote brothers. In 1900 A.Z. Pote became the proprietor and operated the store until his retirement in 1929 when his son J.V. Pote took over. J. V. ran the store until July 1950, when Samuel Long acquired the store and became postmaster. The post office closed in March 1981 and the store was closed in August 1994.