By JOSEPH WALK
For the Herald

Newcomers to the Cove: Apple Butter 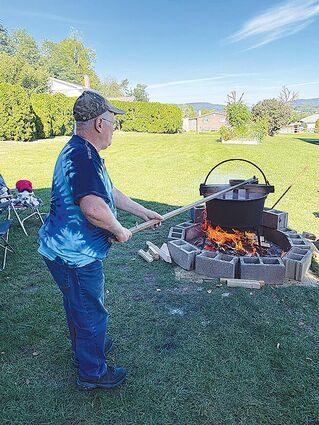 In September our family convened to create sweet, delicious apple butter the old fashioned way – a wood fire, a 40-gallon cauldron, applesauce, lots and lots of sugar, cinnamon, and many cousins, nephews, in-laws, and friends to stir the concoction. We made this annual batch of umber nectar at my brother’s home in Taylor Township. It’s an autumn tradition that goes back as long as I can remember.

Making apple butter is a familiar ritual that takes all day, even with our modern shortcut. Instead of cutting apple schnitz, we buy applesauce instead. Using applesauce instead of apple slices makes the process quicker and the final product is just as tasty.

We set the cauldron on the fire at 5 a.m. It took a crew of four to measure the depth of the batch as it retreated down the kettle, to constantly stir the creation, to take notes for our historical record, and to monitor the fire. Wood was added to the blaze all day to keep the bubble constant. Ladies provided a delectable lunch as they produced soup, sandwiches, and sweets for all to enjoy.

At 3:30 p.m. we removed the batch from the fire. We all helped now, creating an assembly line with dippers and funnels, pouring the results into Mason jars of varying sizes. From 32 gallons of applesauce, 75 pounds of sugar, and a healthy dose of cinnamon, we created 19 gallons of dark brown, sticky goodness. We added lids and waited for cooling and sealing. As the sun set, we were spent but elated that the day was productive. We kept a traditional craft alive and reconnected with folks we love but don’t see often enough.

Apple butter making is a great time to reminisce about Grandpap Dick’s farm. We are Cove newcomers but not altogether unfamiliar with the region. Mom is originally from the Bakers Summit/Ore Hill area. Our family would travel to our grandfather’s farm near Roaring Spring each fall to make apple butter and to butcher hogs (but not on the same day). These visits were more than just an excuse to gather as a family. They were carefully choreographed with revered customs in which aunts and uncles each played specific roles. Each adult had a task to perform if the day was to succeed. As kids, we watched and participated (with supervision) in those October or November rituals.

Butchering was necessary to sustain Grandpap through long Blair County winters. It was another family event, of course. I learned quite young that the animals were treated with an uncommon respect, almost reverence. A kettle again was used to boil the hog’s adipose layer to render fat for lard. The chunks were pressed into the by-product “cracklins.” Again, it was an all-day affair.

For apple butter day, the kettle had to be located and cleaned, fire lit, fuel supplied all day, kids at the ready to stir, and, of course, Mason jars and lids washed and marshaled to receive and preserve the inevitable saccharine butter. As a child, I remember aunts and uncles peeling apples grown on the farm and saving the resultant schnitz for the cauldron. I would occasionally steal an apple or two for a snack. No one seemed to mind. I recall Mom calling apple butter “lattwarrick” from the Pennsylvania Dutch dialect.

Homemade apple butter is more than just a spread for homemade bread. It is history.

The kettle we used to make apple butter this year was not the original one Grandpap Dick used. That cauldron was handed down to a cousin living in Montgomery County. The one we used in September was a kettle our mother, now passed, bought years ago for the specific purpose of boiling apple butter and keeping the tradition alive. That, in itself, is special.