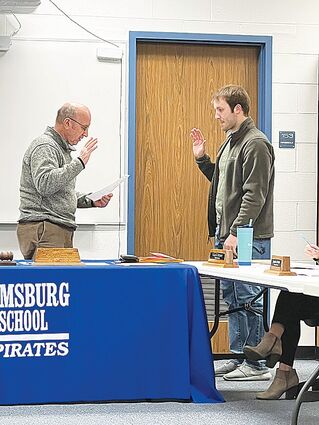 President Dr. Barry England delivers the oath of office to Austin McMonagle during the special board meeting.

After the last Williamsburg Community School Board meeting, voting for the vacant seat left by Janet Lee was tied between two candidates. A special meeting was called on Wednesday, Jan. 26, to try to fill that vacant seat.

Two candidates – Jenny O and Austin McMonagle – appeared before the Board, and a ballot was cast for the two. In the ballot vote, McMonagle received six votes, after only needing five to win the seat. O received two votes.

Ben Postles made the motion to nominate McMonagle to the vacant seat with Louis Brenneman seconding. The motion went to a role call vote. During...