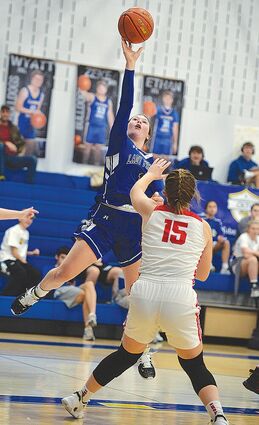 Shown is Williamsburg's Ayla Hileman as she puts up a one-handed shot over Everett's Olivia Hillegas during the ICC tournament on Friday, Feb. 18, at Claysburg High School.

At Claysburg on Feb. 18, the Lady Pirates defeated Everett, securing their spot in the ICC Championship. Williamsburg won 51-39.

Jayla Woodruff and Ayla Hileman had a double-double with 18 and 14 rebounds respectively. Kendel Norris had a big game with 16 points.