Visitor to the Cove 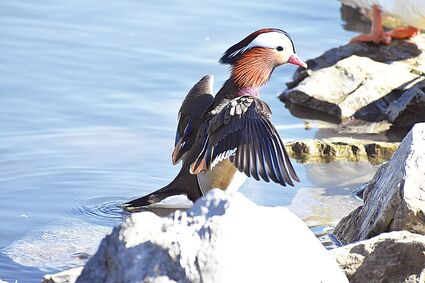 Cove citizen Rodger H. sent this photo of a Mandarin duck to the Herald. This duck was at Henry's Pond in Martinsburg.

Mandarin ducks are native to East Asia and have populations throughout Europe, so it is rare to see one waddling around the Cove.

This little guy enjoyed the sun and higher temperatures on Tuesday, Feb. 22.

According to ebird.org, these ducks are mainly found in pairs or singly, but they will gather in larger flocks over the winter. The website also notes that they are usually found at lakes and parks.

The one captured here is a male. The female "has narrow white spectacl...