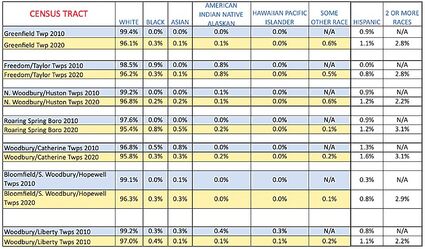 Census data shows a slight shift in demographics in Morrisons Cove between 2010 and 2020, tied largely to a change in the way data is collected.

Data released by the U.S. Census Bureau in January indicates that Pennsylvania's population has grown more racially and ethnically diverse since 2010.

Those numbers have not only changed in dense urban population areas, but also in less heavily populated and historically homogenous rural areas like Morrisons Cove.

Evidence of actual increases in the number of ethnic minorities within the local communities can be seen in raw Census Tract data and school enrollment profiles, but those increases are relatively small and don't tell the whole story.

To a large extent, some of these increases wer...