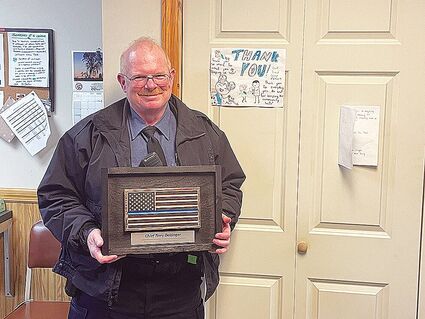 Freedom Township Police Chief Terry Dellinger holds a plaque presented to him by the Pennsylvania State Police in honor of his more than four decades in law enforcement.

After 42 years in law enforcement, Freedom Township Police Chief Terry Dellinger is handing in his badge and heading off into retirement.

Dellinger started his career in 1980, when he joined the Roaring Spring Police Department, a move, he said, he made when a family member became the victim of a crime.

"My grandfather had gas stolen out of his car and I decided then I wanted to work in law enforcement," he said. "I had never really thought about it before but when that happened, something told me this is what I wanted to do."