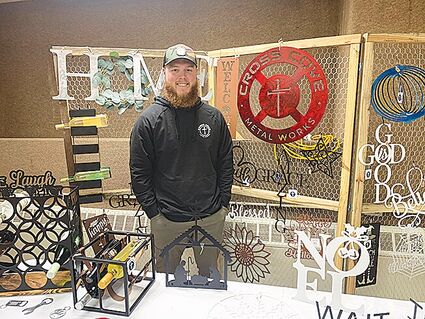 Austin Berkhimer named his business after the road he lives on, Cross Cove. But the name is also a nod to God, who brought Berkhimer to his mission trips in Barbuda. "I started Cross Cove Metal Works as a go-between for what God had for me next. What he had next was Barbuda," said Berkhimer. Berkhimer participates in many craft and vendor shows when he's home, as shown in this photo.

When Austin Berkhimer started Cross Cove Metal Works, he was using it as a "go-between for what God had for me next." Berkhimer didn't realize at the time that his business – both the profits and the flexibility – would set up his next step perfectly.

Berkhimer spends half of the year in the Cove completing metal working orders and attending trade, craft and vendor shows. The other six months, Berkhimer travels to Barbuda for mission work.