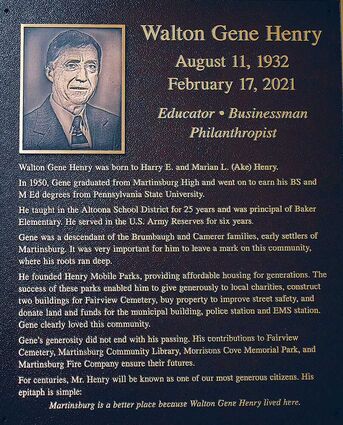 The plaque for the W. Gene Henry Memorial (shown) is currently in the Martinsburg Borough office. Residents are encourage to stop in and see the plaque. The granite for the project is expected in June at the earliest. The council will vote on the location of this memorial at next month's meeting.

Martinsburg Borough Council saw guests at its monthly meeting. State Rep. Jim Gregory (R. Blair) attended as part of a previous promise to visit the municipalities he represents at their meetings. He also attended Taylor Township's meeting earlier that evening. Gregory noted that he is up for re-election in May.

Trish Haight also attended the meeting. This year, Haight announced her candidacy for the Pennsylvania General Assembly in the 80th District. Haight attended this meeting to introduce herself and her platform.

The meeting was highlighted by further discussion on the W. Gene Henry Me...