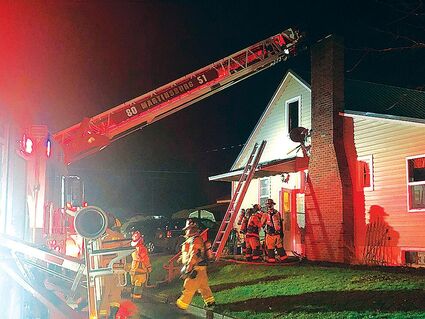 The Martinsburg Volunteer Fire Co., Station 80, responded to a call of smoke in a house about 15 minutes before 9 p.m. on Tuesday, April 12. The fire apparently started on the second floor when a household pet knocked an item of clothing onto a light fixture. There were no injuries. Crews were on scene for about 1.5 hours. The house was habitable after the fire.

At 8:46 p.m. on Tuesday, April 12, the Martinsburg Volunteer Fire Co. was called a report of smoke in the second floor of a house at 301 E. Julian St., Martinsburg.

According to Martinsburg fire Chief Randy Acker, smoke was visible in the structure when crews arrived on the scene.

Fire crews extended ladders to a second-story window and crews entered to combat the blaze.

Chief Acker said the fire was apparently started when a light in an upstairs closet had an item of clothing knocked onto it, possibly by a household pet.

The firefighter crews had the fire under control in about 15 minut...