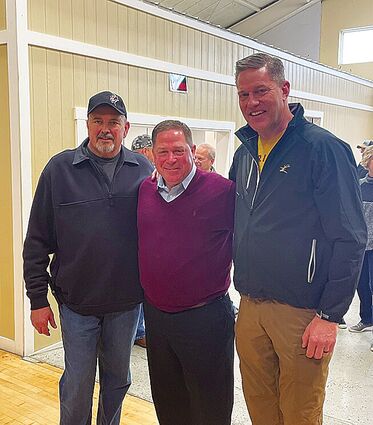 Republican gubernatorial candidate Dave White (center) is flanked by Williamsburg Mayor Ted Hyle (left) and Jim Foreman, chairman of the Blair County Republican Committee (right). White stopped by Williamsburg on Saturday, April 16, to talk about his plans for the state if elected.

Republican gubernatorial candidate Dave White stopped by the Williamsburg Community Center on Saturday, April 16, to talk with local leaders about his plans for the state.

White joins a crowded field seeking the nomination with nine candidates expected to be on May's primary ballot.

White of Delaware County said the state doesn't need another lawyer or career politician in the governor's mansion, rather a proven businessman.

White said he started his working life as a construction worker before starting a small HVAC company that has grown to employ 85 people. White said he supports the trad...