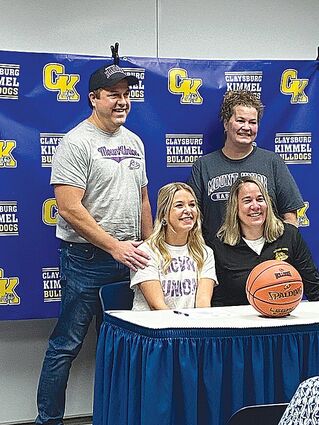 Bailey Garver (front, left) is shown with her coach, Jess Veverka (front, right), and her parents, (back, from left) Jim and Kara Garver.

Claysburg-Kimmel had two athletes sign their intent to continue at the collegiate level.

According to C-K Principal Charles Kassick, Garver was also named first vice president in Pennsylvania for FBLA. She was chosen out of 2,000 qualified individuals.

Football coach Matt Bilchak said, "Players usually fight over positions, but Wyatt came to me an...