By CRAIG A. DIEHL
For the Herald 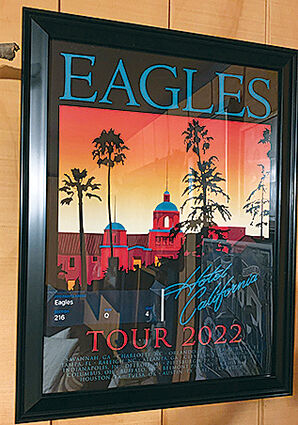 On Saturday, March 26, my youngest son Brad and I traveled to Pittsburgh to see The Eagles in concert at PPG Paints Arena. We had sold our tickets to the Washington, D.C., show some months back due to having to wear masks. Brad then talked me into the show in Pittsburgh, since it was closer and didn’t require masks.

I have seen The Eagles five times and while each show was special in one way or another, this Hotel California tour was by far the best. It was like putting a CD into a quality stereo system, but it was somehow much, much better. The concert started with “Hotel California” with Don Henley on drums, vocals by Vince Gill, and Joe Walsh, Timothy B. Schmitt and Stuart Smith on guitars. Walsh and Smith did the iconic dueling guitars on the ending rifts, fading into spotlight on Vince Gill doing a perfect “New Kid in Town.” Just phenomenal vocals!

Deacon Frey – son of the late Glenn Frey, co-founder of the band – usually sings “New Kid in Town” with Henley, but he is not touring with the Eagles at present, so the spotlight shifted to Joe Walsh.

All of them are 75 and up. Still, Henley stayed on drums until “Wasted Time.” With the spotlight on him, Henley paused to tell attendees that he had a really bad cold. When he talked, you could tell, but it didn’t affect his singing one bit.

Next “Wasted Time (Reprise),” which featured the Pittsburgh String Orchestra rising out of the floor – SO cool.

A choir in white robes rose behind the orchestra for “The Last Resort.” It was unbelievable. I whispered to Brad, “Watch and listen, Henley has to hit a very high note here at the end. Let’s see how he does with the cold.” He hit it so well.

After a very nice performance of Victim of Love was Joe Walsh’s solo “Pretty Maids All in a Row,” followed by “Try and Love Again.”

That was the end of the Hotel California part of the show. We were in awe the second part of the show, which started with Henley back on drums for the spooky “Witchy Woman.” The spotlight shifted to Schmitt for his solo “I Can’t Tell You Why,” which was pitch perfect as always. After “Lyin’ Eyes” and “Already Gone” was a song from Walsh’s James Gang days – “Funk #49”. They ended with “Heartache Tonight.”

The Eagles are still touring throughout May, ending the USA tour in Las Vegas Memorial Day weekend. If you have time and plenty of money, I can’t recommend the show enough.

After seeing them five times, I can say they have a polished production from the lighting, to the sound system, to the staging, to the engineering. All of it is worth every penny.

Editor’s Note: Diehl is an employee of the Herald.