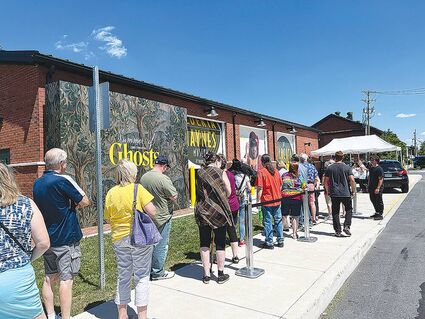 A line of attendees wait outside the Alberta Hayes Museum in Altoona. The pop-up experience took place on June 29.

Amy Eicher, director of social strategy for CBS, said that they were there to celebrate "Ghosts."

"It's the number-one new show of the past season," Eicher said.

The show is currently shooting its second season.

"We are doing events throughout the country all summer," Eicher said. "Today, we are celebrating Alberta, our 1920s jazz singer character. She is a hidden figure of history. In the lore of the show, her biggest fan Todd is from Altoona, where he has the Alberta Haynes Museum in his mother's garage."

The Amtran garage was used to take it to the next level with a real Alberta Haynes Museum.

"We are really excited about the show," Eicher said. "We really believe in it and want to continue its success in season two."

Eicher continued by saying that they wanted to do something exciting to continue building awareness as well as to celebrate the show and what it has become.

"Our co-show runner Joe Port is from Altoona," Eicher said. "We are really proud and honored to do it here in his hometown, where the Baker Mansion is one of the inspirations for the mansion in the show. Hettie and Elias Baker are the namesakes of our characters from that era as well."

Ghosts airs Thursdays on the CBS Television Network and is available to stream live and on demand on Paramount+.