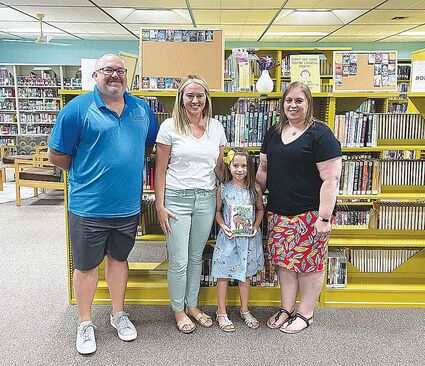 Eight-year-old Ava Kozminski donated $230 from her lemonade stand to the Martinsburg Community Library. Kozminski was joined by her parents (from left) Tom and Stephanie Kozminski as Library Director Danette Feathers (right) presented the first four books in "The Critter Club" series, which were purchased with Ava's donation.

Ava Kozminski, daughter of Stephanie and Tom Kozminski, at just 8 years old was able to raise $230 at her local lemonade stand.

Instead of keeping the money for herself, Kozminski graciously donated the money to the Martinsburg Community Library.

"She wanted to have a lemonade stand," Stephanie said. "She decided to give the money to the library."

Kozminski was able to raise the large sum of money she made with the help of her parents who advertised the local event on Facebook.

"We live in Oakdale," Ms. Kozminski said. "We are in a pretty central area, so there were a lot of people that...