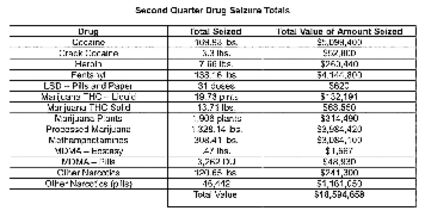 The Pennsylvania State Police (PSP) announced today that troopers seized $18.6 million worth of cocaine, heroin, fentanyl, methamphetamines, and other illicit drugs in the second quarter of 2022.

During the second quarter, troopers seized nearly 170 pounds of cocaine, 308 pounds of methamphetamines, 138 pounds of fentanyl, and over 46,000 pills of assorted narcotics.