A Stranger’s Game By Colleen Coble 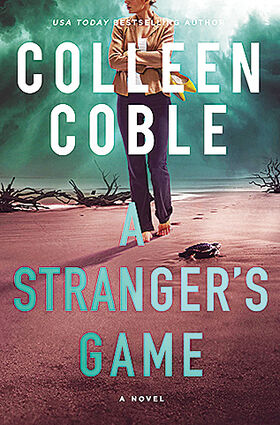 Victoria Bergstrom is the sole heir to Bergstrom Hospitality, a worldwide five-star chain of hotel resorts. She had not been to the hotel on Jekyll Island for 18 years. Her mother had fallen from the balcony of their suite and died. Victoria couldn’t bear to go there until now. Her best friend Lisbeth was working on finding out about Victoria’s mother’s death when her body was found in the ocean. Lisbeth must have learned something to endanger her life. Victoria decided to return to Jekyll Island undercover as a new employee by the name Torie Berg. She was sure that Lisbeth was murdered and she was determined to find out why.

Joe Abbott, a widower, and his daughter Hailey lived on Jekyll Island. Hailey, a bright five year old, loved to watch the turtles emerge from their nests and head to the ocean. Joe spent his days training sea lions for the Navy. He trained them to identify suspicious scuba divers and place a clamp on their leg.

It was not long before Torie experienced strange happenings. Someone was toying with her. What was the game they were playing? Did it have anything to do with Lisbeth’s death? Lisbeth was terrified of the water. She would never even wade in the ocean. How did she drown? Was Torie getting too close to the truth?

Both Torie and Joe found themselves in dangerous situations. Were these events related? Torie and Joe grow closer as they try to figure out who was playing games with them.

Colleen Coble has written a number of book series. She has over four million books in print. She is the CEO of American Christian Fiction Writers.