Nic's Rounding Up to Help Library 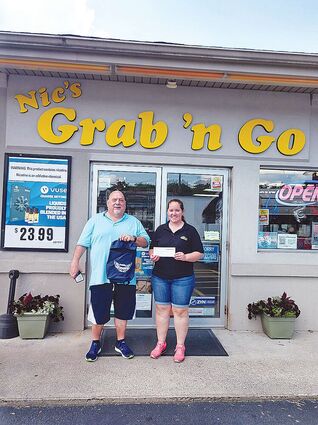 Library Director Roane Lytle receives a check from Nic's Grab 'N Go manager Kristin Bigelow following Nic's round up campaign. Lytle is holding a copy of the backpacks that summer reading program students will be receiving following the end of the program. In all, Nic's donated over $1,400 to the library.

For over a year, Nic's Grab 'N Go in Williamsburg has participated in a round-up campaign that started because of the coin shortage.

Customers are asked to round-up their change to make their bill even. The extra change adds up to make a donation.

One of the past recipients of the round-up campaign was the Williamsburg Fire Company.

The newest recipient is the Williamsburg Public Library.

Bigelow said the library will also be the recipient of the next quarter of July, August, and September.

"We are thrilled to have been able to raise nearly $1,500 for the library, and we really appreciate our customers supporting the effort," Bigelow said. "We look forward to being able to present them another check in the fall."

The library will also be setting up during the Williamsburg Community Farm Show. According to Lytle, the library will be showcasing STEM-related activities. They will also have the 3D map of town for community showcase, and community members will be able to place their houses on the 3D map. There will be a demonstration of the 3D printer.

"It's just nice to see people coming back to the library," Lytle said.

Lytle also wanted to remind the public that in this heat wave and during the summer months, the library does have air conditioning for the public.