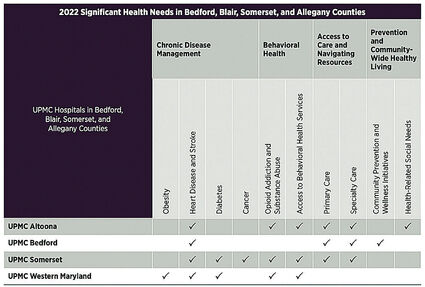 The residents of the four-county region have a wide range of health concerns. The 2022 Community Health Needs Assessment identified four significant health needs of importance to the communities served by UPMC Altoona, UPMC Bedford, UPMC Somerset, and UPMC Western Maryland.

The University of Pittsburgh Medical Center (UPMC) has released an annual report identifying the "significant health needs" of Morrisons Cove and the surrounding region and describing its efforts to address the problems.

An introduction to the report released in August 2022 states, "UPMC identified significant health needs, prioritized them, established action plans, and identified resources to address those needs. The 2022 reports build on prior assessments and implementation plans developed in 2013, 2016, and 2019."