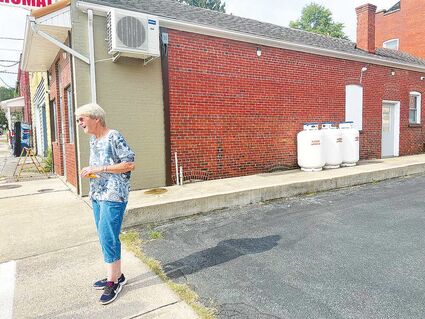 Cathy Over, standing outside the present-day laundromat talking with those on the tour. The site of the current laundromat used to a butcher shop in Williamsburg.

When it was announced earlier last week that former sixth grade teacher Cathy Over was doing another Walking History tour of Williamsburg, I was more than excited. Saturday, Sept. 3, I set out with a group of five plus Over to walk around town to learn some of the history.

Over said she has done this walking history tour at least 20 times, most with her sixth grade class, some in cooperation with Trail Town Market (as this was) and some with the Williamsburg Senior Center. Over said she enjoys the variety of people who want to come on the tour and she learns something new each tour. Over started the tour at Riverside Park. She said that the trail that we now know as part of Rails to Trails served as much of the canal system in the 1800s - but eventually once the canal system was no longer used, it became the basis for the train system which would prove to be of the utmost importance when the time came for the paper mill.

Coming from Maryland, the founder of Williamsburg was Jacob Ake. He was fascinated by the Big Spring. At the time, this area was part of Huntingdon County. Williamsburg was called "Aketown," but Ake eventually changed the name to Williamsburg to honor his first-born son William. Ake and his wife Catharine had five sons and two daughters. Ake bought the land first known as Williamsburg at a whopping $6 an acre. It was 600 acres for $3,600. After hiring a surveyor, there were five main streets in the town - Front, 2nd, High, Plum and Spring.

Over went on to say that Ake, just like many after him, was "very interested in the youth of the town," and started the first school and paid for everything (teachers and supplies).

"Education has always been a big part of Williamsburg," according to Over.

Walking up from Riverside Park to the corner of High and 2nd, we got to the location once known as the Dean Theater. Over said the Dean Theater opened in 1915 and showed silent films. In 1936, there was a fire at Dean Theater, but Over said a lot of the owners of the building to come always restored and kept the half-circle shaped window which signaled the theater. Over added that the paper mill employees, as part of their Christmas gifts, would get private showings in the theater and a popcorn ball.

Over then began talking about one of Williamsburg's most famous sons - Charles Schwab. Schwab was born in Williamsburg during the Civil War (1862) and his father, John, made wool blankets for the soldiers during the war. When Schwab was five years old, his family moved to Loretto but according to Over, "Schwab really loved this town."

The residents around that time saw the prevalence of both water and trees. They eventually went to Schwab and talked about investing in a paper mill industry, right here in Williamsburg. The projected cost at the time was $250,000. Schwab was intrigued and it soon, according to Over, "became a top priority for Schwab."

Next, we headed up High Street to look at the Williamsburg Hotel, which was built by Schwab to "wine and dine investors," said Over.

The investors wanted to know about Williamsburg, so they could stay at the Williamsburg Hotel with Schwab.

Schwab died in 1939, penniless and in over $300,000 worth of debt. His remains are in a private mausoleum at the Saint Michael Catholic Church Cemetery in Loretto.

Over said over the years there was a furniture store, clothing stores such as Lightner's, restaurants, seven gas stations, two funeral homes, supermarkets and a jewelry store. According to Over, a lot of people are surprised to find out that Williamsburg is actually older than Altoona, and Hollidaysburg is the oldest town in Blair County. "

A lot of people didn't need to go to Altoona," Over said. "Everything you would need would be right here in town."

Walking further down High Street, Over talked with walkers about the closer the house was to the street - that was the earliest houses built in Williamsburg.

We stopped in front of the post office and it is the second oldest post office in Blair County. Kim Umstead and others on the tour believed that the post office was originally across the street but following a fire, it was moved to its current location.

The group stopped at the present-day senior citizen housing, the Spring House Apartments. An elementary school was once located on this site. In 1891, it was mostly elementary, first through sixth grade, and it was used until 1940. In 1940, the townships and borough consolidated elementary schools.

Moving further up High Street, the group stopped in front of the present-day Blue Lantern Bed and Breakfast, the Big Spring, and the Neff Mansion (currently owned by Bud and Tina Mingle). Over talked about a rumored dungeon in the bed and breakfast where you could find some "corn on the cob twist your hair" whiskey.

Over also said the red brick house across from the Methodist Church was another supposed place that bootlegged liquor since Williamsburg was a dry town.

The Neff Mansion, across from the Big Spring House, was owned by John Neff who was big in the iron furnaces. The home was built in 1829. The wrought iron railing around the home, along with the railing around the bed and breakfast, were made in the foundry, which was the old Metz Hardware building across from the present-day borough office. Finishing up the tour, Over took us to the Presbyterian Cemetery to see the grave site of one of Williamsburg's other famous "sons" Wilmer Stultz, who was born along Piney Creek. Stultz's claim to fame was taking a flight with Amelia Earhart across the Atlantic Ocean before she made her solo trek across. Stultz died in 1929 following a plane crash in New York.

Over said she gets information from research, from those who go on the tours with her and other people who know about the history of Williamsburg such as Joy Zengel; the late Bill Cramer; and former high school librarian, the late Jack Potteiger. When she was teaching in the elementary school, Over created a sixth grade curriculum unit based on Williamsburg history. At the culmination, students would go on one of these walking field trips and see up close some of the places they learned about.