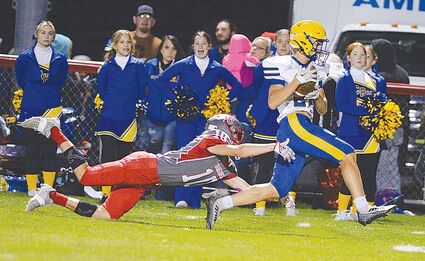 Central's Dalton Metzger dives at Chestnut Ridge's Cameron Garrett after a reception but can't stop him from scoring in second quarter action.

The Central Dragon Football Team faced the Chestnut Ridge Lions at home this week. After last week's defeat over the Forrest Hills Rangers, the Dragons continued its push through mid-season with a 39-14 victory over the previously undefeated Lions.

To start off the game, the defensive domination by the Dragons caused a quick turnover, giving them the opportunity to take an early lead with a 20-yard reception by Shalen Yingling for a touchdown. Back on defense, an interception by Kade Rhule set up the Dragons for another scoring drive capped with a one-yard scoring run by Hunter Smith. A fum...