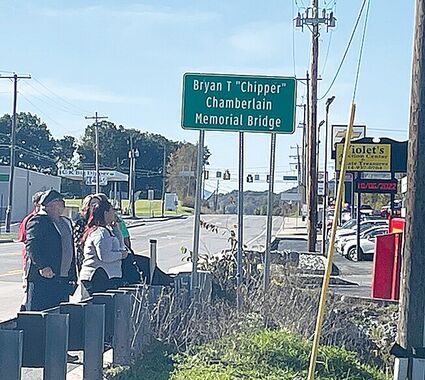 The family of Bryan "Chipper" Chamberlain unveil the sign dedicating a bridge on Dunnings Highway, Claysburg, to the fallen PennDOT worker. Chamberlain was killed in 2018 from a work-related accident.

Family and friends of Bryan "Chipper" Chamberlain gathered at the Claysburg Volunteer Fire Company on Thursday morning, Oct. 6, to help dedicate the Dunnings Highway Bridge over Pine Run in his honor.

Chamberlain, a 2006 graduate of Claysburg-Kimmel High School, was killed in 2018, at the age of 30, in a work zone accident. Chamberlain was working for PennDOT at a site along Juniata Road, Frankstown Township, when he became trapped beneath a piece of heavy equipment machinery.

According to reports, Chamberlain was a passenger on the machinery when it popped out of gear and began rolling ba...