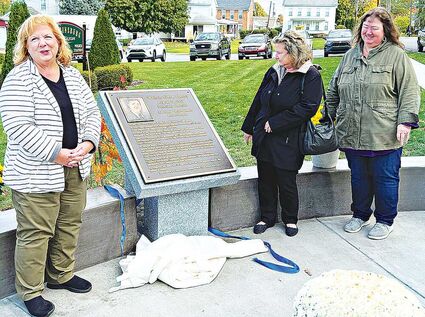 Shown are (from left): Mitzi Henry-Jones, Mindy Lind, and Marcia Bechtold, nieces of W. Gene Henry. The three were present for the dedication of the memorial in Martinsburg dedicated to their uncle.

A cool, crisp, fall day provided the perfect backdrop for Martinsburg to honor a man who spent most of his life giving to his community, and on Saturday, Oct. 15, the community gave a little back by dedicating a permanent memorial to W. Gene Henry, a man many considered "Mr. Martinsburg."

Henry, who died last February at age 88, was a benefactor of the community who used his resources for the betterment of the place he called home. Shortly after he passed away, former Borough Manager Randy Stoltz said people would be "hard pressed" to drive through the borough and not pass a building or str...