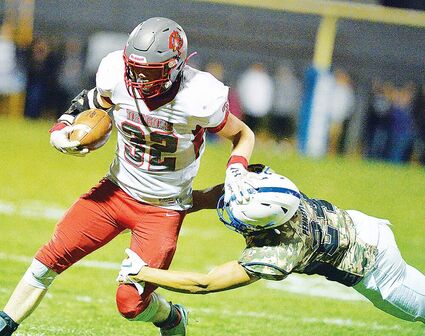 Bedford's Maxwell Washington dives at Central's Hunter Smith on a sweep play. On Friday, Oct. 14, Central's varsity football team won an away conference game against Bedford with a score of 38-35.

One might think the Northern Bedford County High School football team wouldn't have a lot to prove after following up last year's District 5 Class 1A championship and PIAA quarterfinal run with an 8-0 start, but you'd be mistaken.

The Black Panthers still would like to add an Inter-County Conference title to their list of achievements, something they hope to rectify on Friday.

"We haven't won the division championship in I don't know how long. Bellwood usually wins it," Northern Bedford quarterback Eion Snider said. "This would finally show that we're not just some little school, that we ca...