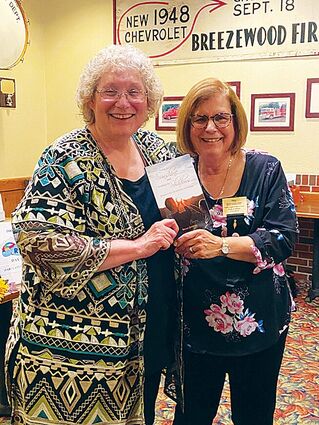 Alpha Beta Chapter of the Delta Kappa Gamma Society, International, met at Hoss' Restaurant in Bedford on Oct. 13 with special guest Veronica Sell, president of Beta Epsilon Chapter. President Becky Johnen called the meeting to order with a meditation on the Value of Uniqueness.

Sandra Hoenstine announced that Grant-in-Aid scholarship applications are due in December for future women educators who are presently juniors or seniors enrolled in college education programs. Also, twelve applications are being considered for Teacher Enrichment Grants. The winning grants will be funded through a generous gift from a "friend of the chapter" and through the work of the Ways and Means Committee led by Lois Stoner, who announced a used book sale on April 1 at the East St. Clair Township Building.

Linda Clapper, projects chair, announced the status of the blanket program and ongoing collaboration with the Roaring Spring Girl Scout Troop 43009. In other projects, Jenn Harclerode thanked members for the donations for local backpack programs brought to the meeting to be distributed to local schools by the members. Harclerode emphasized the increased need for items at this time. In line with their commitment to the Jabulani School in Zimbabwe, Africa, the members are donating $684.

The evening's program was coordinated by Patricia Valentine and Judy Conrad of the Visual and Performing Arts Committee. Members had been asked to bring samples of their talents inside black garbage bags titled "Possible Bags." As each bag was opened, members guessed whose "talent" was revealed. Needle work, painting, rug-making, photography, and writing were some of the arts showcased.

The next meeting of Alpha Beta Chapter is scheduled for December 3 at the Bedford Middle School for their annual Christmas Tea.