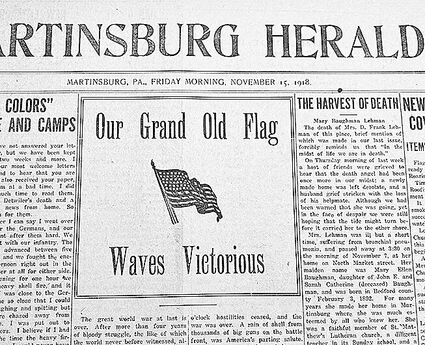 From the Herald of

At 2:45 Monday morning, November 11, 1918, the State Department officially announced the armistice ending the great world war had been signed. At 6 o'clock hostilities ceased, and the war was over. As news of the end became known to the people here at home, great demonstrations were again set in motion in all parts of the country. Martinsburg had a big street parade. The school children, who had just resumed their studies after a brief vacation, were dismissed and quickly formed a marching line. The band, automobiles, working men and everybody joined in...