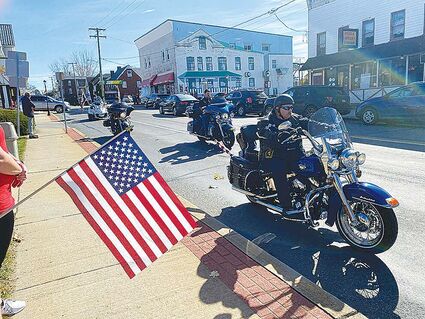 After Mayor Richard Brantner Sr. took to Facebook to encourage citizens of Martinsburg to line W. Allegheny Street as Cpl. David Defibaugh's remains were transported from Martinsburg to Altoona, groups of people with flags stood to honor Defibaugh and send him off.

For 72 years, Cpl. David Defibaugh of Duncansville rested as an unknown in a grave at the National Memorial Cemetery of the Pacific in Hawaii, known as the Punchbowl. Defibaugh was killed in the Korean War in 1950 but was listed as unknown until the Defense POW/MIA Accounting Agency (DPAA) positively identified his remains this year. For more than seven decades Defibaugh was among the nearly 82,000 Americans still unaccounted for from World War II through the Gulf Wars.

No man left behind

With so many veterans still unaccounted, some buried in graves marked unknown, some not yet recovered from where they fell, and an estimated 41,000 presumed lost at sea, finding and identifying the unaccounted is a monumental task that the United States military and various veteran's groups continue to pursue.

"No man left behind," said Bill Brantner, a veteran of three wars and two military branches.

Brantner was 17-years old in 1967 when left his home in Williamsburg for the Army and a year later found himself fighting in the Vietnam War. By the time Brantner concluded his military career, he traded in his Army greens for the Navy's blues and saw action in both Gulf wars.

As a veteran, Brantner said he is a member of a family that may not share the same blood, but have taken an oath to shed blood, if necessary, in defense of the United States. Brantner said everyone who has served or currently serves are bound together in a brotherhood and the bond that ties them together is why efforts to bring everyone home will never stop.

"Our POW/MIA flag says it all, 'You are Not Forgotten' and they mean it," Brantner said. "Whether it takes months, years, or decades, the government is not going to give up. They are going to find you and bring you home."

Lynn Akers of Williamsburg is the Western Vice President of the American Legion Department of Pennsylvania, the Chaplain at the Williamsburg American Legion, and serves on the National Legislative Committee that lobbies congress to protect the rights of veterans both living and deceased. Akers said she grew up on military bases during her father's 30-year career in the Marines and learned at a young age that the bond between veterans transcends time and space and that there is no generation gap when it comes to the brotherhood.

"Anyone who has ever served, whether in war time or peace time, no matter what years they served, are in the brotherhood and they won't stop working to bring their brothers home," she said.

Akers said American love and appreciation for its veterans won't allow them to give up on searching for and identifying the fallen of war.

Working to Bring Them Home

Akers said national organizations like the DPAA, the National League of POW/MIA, and the Korean War Project have kept the missing and unaccounted from becoming victims of time and fading memory.

Akers said keeping the memory of POW/MIAs alive and in the American consciousness is a driving force in continuing efforts to identify the unaccounted. She said POW/MIA Recognition Day, held on the third Friday of every September is an important reminder that there are still many Americans to bring home.

Akers said she knows first-hand the pain a family feels when a loved one is missing and unaccounted for. She said the father of one of her closest friends went missing.

"She passed away a couple years ago and never got closure," Akers said. "She never gave up trying to find out what happened to her dad, but she went to her grave never knowing."

Akers said the pain of losing a loved one in war is great, but when you don't know their fate, the uncertainty adds a level of pain for families that they carry with them throughout their lives, and into future generations.

"There needs to be family closure," she said. "The veteran needs to be brought home to rest alongside their families."

Brantner said the families of the unaccounted go through their lives with an emptiness that cannot be described, and even though many have passed on, it's still important to find and identify missing veterans.

"There are a lot of families who have lived with the uncertainty for generations now," Brantner said. "Hopefully they can all get closure some day."

Time is on their side

At first glance, the odds of finding and identifying the unaccounted for should decrease as the gap between when they went missing and present day widens, but the passing of time has benefitted efforts as advances in science and technology have given us resources for identifying human remains that are far superior to previous methods.

Defibaugh's remains were identified using dental and anthropological analysis and mitochondrial DNA analysis, methods that were not available when he was killed. And DNA technology has advanced to where instead of using a relative's DNA to match to an unknown, scientists can use the unknown's DNA to find relatives. As fewer direct relatives of World War II and Korean War veterans remain, matching DNA to a next generation relative could potentially lead to many more unknowns reclaiming their names and being brought home.

"The things they can do now they couldn't do then and that could bring a lot of guys back," Brantner said.

Akers said ancestry sites have also been used to track down family members of lost veterans.

"A lot of people track their ancestry and they have found matches that way," she said. "Anyone who has a family member missing should put their DNA in a database because it can get them identified. They need the DNA of the descendants."

Brantner said the funeral procession for Defibaugh illustrated how much it means to Americans to have their veterans home. As Defibaugh's remains made the journey from Martinsburg to Altoona, people lined the streets and wave American flags as he passed.

"That says a lot," Brantner said. "Most of the people out there were not yet born when he passed, but they still felt a connection and wanted to come out and pay their respects."

Defibaugh was buried with full military honors, just as he would have been had his service taken place directly after his death. Brantner said the military does not cut corners when it comes to funerals and full honors are given whether the death occurred recently, or 70 years ago.

"It is the respect and esteem our country has for its veterans and time doesn't take any of that away," Brantner said.

Akers said Defibaugh's journey from unknown to burial is a testament to American ideals and its tireless commitment to every person who ever put on the uniform of their country. She said the families of unaccounted veterans embody that spirit as they continue the search for their loved ones.

"These families never give up," she said. "It is our duty as Americans to make sure that their remains are brought back and reunited with their families and that their boots are on our ground."