Lady Dragons Off Target in Shootout 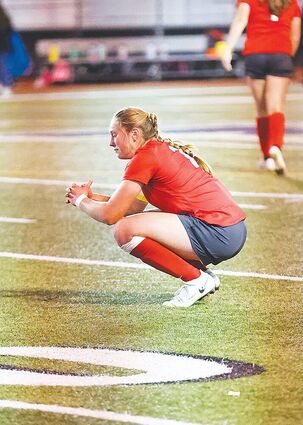 Central's Ella Garner takes a moment after the Lady Dragons fell to Bedford.

The Lady Dragon Soccer team faced the Tyrone Lady Golden Eagles in the District Six AA Semi-Finals. The Dragons' defense led Central to a 4-3 victory in order to advance to the finals where they faced the Bedford Lady Bisons. A hard-fought game led to a 1-1 tie at the end of regulation as well as through two overtimes. The Dragons lost for the first time of the season 2-1 in a shootout against the Bisons.

Early in the first half against the Eagles, Carlie Hart scored an unassisted goal to tie Tyrone after being down a goal. Soon after, the Dragons got the ball in a corner kick, where Kira Trexler passed in to Ella Garner for another Central goal to take the lead before half. The Dragons quickly extended their lead once the second half began with an unassisted goal by Trexler. Brynn Miller would soon score an unassisted goal herself to further extend the Dragons' lead. After being down by three points, the Golden Eagles pushed for a comeback, scoring twice within the final ten minutes of the game to bring it down to a one-goal difference. It wouldn't be enough, however, to bring down the Dragons, who's defense held off until the game's end, finishing with a one-goal advantage. The Dragons' defense defended ten of 13 shots throughout the night, and overall dictated the game.

The match against the Bisons ended in a low scoring game for the Dragons' standards. Trexler scored early in the first half, being assisted by Leya Hazenstab. The rest of the first half remained scoreless. The Bisons scored once in the second half to tie up the game. Two overtimes ensued where the Dragons' defense kept the ball away from their goal, but no further scores were made. In the shootout that followed, Ella Garner scored the lone goal for the Dragons. Keeper Darcy Heltzel made one save, but was unable to save the rest, ending in a tragic 3-1 shootout loss for the Dragons.

Although losing to the Bisons, the Dragons will continue their season with a match against the District Nine champion at a time and date to be announced.