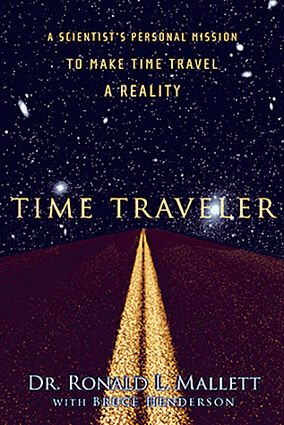 Dr. Ronald L. Mallett holds the belief that this century will be when time travel becomes a reality. Born in Roaring Spring, PA-native Mallett dreamed one day he would help join science fiction and reality in bringing his life long goal to fruition. After the loss of a parent, Mallett vowed to one day invent the very means of being able to see his loved one once more — the time machine. His creativity and intellectual capabilities could certainly help to make it a reality. His love of reading propelled him into a world of learning and he saw his future in the scientific world. He became a theoretical physicist, and discovered the basic equations for the vehicle he believed would transport us to the past.

In introducing his book, he introduced us to his dream, as well as the world of physics and quantum mechanics — a world of probability. Mallett’s straightforward explanations make a somewhat overwhelming topic easy to understand. His work, based on Einstein’s theory of relativity, led him to the conference where, for the first time since the age of eleven he would reveal his most secret ideas, this time to a roomful of his peers. Understandably nervous, he followed a colleague presenting the “many worlds” theory, which theorized it was possible or probable for multiple parallel worlds to exist at the same time within our universe.

While he lost a part of himself he’d never get back with the loss of his father, he eventually found himself again when he discovered the escape from reality into the fictional world of fantasy books. H.G. Wells’ “The Time Machine” began his obsession and he read every time travel story could find. After years of studying Einstein, Mallett’s scholarly, as well as personal, interest enabled him to easily explain the famous physicist’s work which became the foundation for Mallett’s own historic work.

Einstein believed imagination was more important than knowledge: knowledge is limited, and imagination encompasses the world. It was on his premise Mallett based his theories and his genius that encouraged a young boy to pursue a dream many would have seen as unobtainable. Time travel may still seem a tall tale of science fiction to many, but Mallett’s passion and imagination combined with his scientific knowledge just might be what it takes to get us there. Will humankind one day manipulate time and space? Only the future will tell.