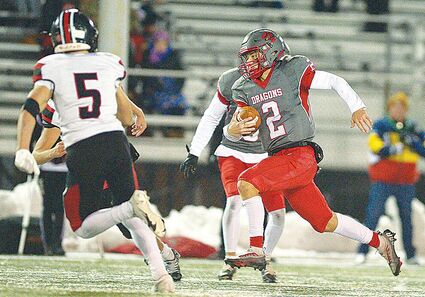 Central quarterback Jeff Hoenstine finds an opening in the Clearfield defense and goes up the middle to score.

Playing during the week of Thanksgiving is an accomplishment of epic proportions for any high school football team, and even greater a feat to do so for two years in a row. The Central Scarlet Dragons began its second consecutive state playoff run with a match against the Clearfield Bisons.

Cold, windy and snowy conditions stifled the Dragons' offense, leading to a slow first half with only two scores for the Dragons. Picking up the tempo in the second half, the Dragons rushed and threw for three more touchdowns. With the Dragons' reserve defensive unit giving up a mere touchdown to the Bi...